Every now and then it’s fun to add a little bit of theatre to the table.

This dessert comes to the table under a glass full of smoke.  When you lift your glass you’re hit with an overwhelming aroma of cinnamon, and when you taste this chocolate mousse it tasted chocolatey, and Smokey and Cinnamon-ey but because the mouse is based on Avocados it has an underlying vegetal flavour. This mousse is no lightweight

A traditional chocolate mousse is an emulsion of custard, chocolate and whipped cream and essentially it is a light texture thanks to the air trapped within the whipped cream.  That would be too delicate to stand up a lit cinnamon quill.

What we need is a more dense creation, and this magic is achieved by creating a mouse using avocado and coconut fats flavoured with Cacao, and then frozen in the freezer.  I use my silicone ice cream mould that has 6 cavities that each make 2 x 50g servings. 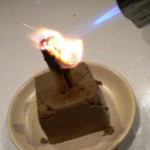