Creamed spinach is a “go to side” for us for meals containing steak. But sometimes I like to add it to a dish as a surprise element such as this meal with a baked potimarron and pulled meat – under the pulled meat is creamed spinach. 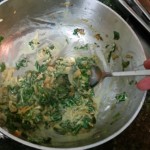