Some days you find you have the luxury of time and energy to cook something complex and adventurous to eat – but for those Other days you need a few “go-to” meals that you know will be tasty that you can easily prepare.  Breakfast is especially a challenge for me because I start my day slowly and build momentum over several hours – luckily I discovered early on that I could, with a little practice, cook up this Lo-Carb Breakfast omelette (almost) every time that was always delicious.

This is essentially a Royal Omelette containing Avocado, Ham and Cheddar.  The best pan to cook this in will be the one you feel most comfortable using.  For many years I used a thin crepe pan, but lately I have been using heavier cast iron skillets and using the residual heat of the pan to finish the cooking with the result that I burn the meal far less often.  I am usually cooking this before my first espresso of the day, so that is a good thing.

For the 180 days that I have so far been LCHF, this (or a simple Bulletproof Coffee) was my breakfast for over 170 of them, and I am still not bored by it.  That might give you an idea of just how luxurious this meal really is. 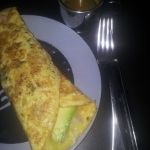