Lo-Carb Maple bacon ice cream is a variation on the Easy Lo-Carb Ice Cream recipe that infuses the flavour of Hickory Smoke and Bacon into the Ice Cream AND also kicks the egg flavour up a notch by slightly over cooking the eggs when making the custard. The end result is a dessert that if you close your eyes, you will think that you just had a mouthful of breakfast Bacon and Eggs – yet it is cold like Ice Cream and of course because its made from pure cream it’s incredibly rich, so we’re going to need those stupidly small mini-spoons again. Yes it is true you can have Diet food that is mostly Fat, because it is good healthy animal fats.  If your cream and Bacon was sourced from animals that lived on grass for most of their lives it will be relatively higher in Omega 3 unsaturated fatty acids (3:1 ratio) than grain fed animals which store mainly Omega 6 unsaturated fatty acids (20:1 ratio).

Because Fats are so energy dense, you need much less volume to feel satisfied.  Finally almost all the carbohydrates in this meal are the residual milk sugars (lactose) remaining in the cream and the trace amounts of glucose in the egg – so while it tastes sweet it won’t trouble your insulin. 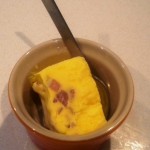