Salmon skin is usually removed and thrown away, or into a stock pot, or just used as insulation for the flesh against the pan.  But with a little effort you can use it as a tasty garnish that turns the subcutaneous fat and skin into salmon bacon. The trick is to remove the skin with as much of the fat as possible starting with that little triangle along the dorsal edge of the fish – kinda like the loin fillet of the fish.  Then you put the skin between 2 trays and bake until crispy.

Salmon is awesome but it’s almost always over cooked.  In my opinion it’s best medium-rare, but it’s difficult to cook fish medium-rare.

With a sous-vide it is possible to perfectly cook a meat from edge to edge to any “Cuisson”.  For Medium-Rare the temp you want is 125°F (52°C) although this is under the pasteurization curve so like Sushi it’s also not safe for people who are immunocompromised such as Children, Pregnant women or the Elderly.

Normally fish meat is infused with a protein called albumin that is released during cooking and ends up leaving an unsightly white discharge when you open the bag (you can just wash it off).  You can prevent the albumin coming out by just brineing the fish in a 10% brine mix for 30 mins in the fridge.

After cooking the fish you can dunk the fillet still in it’s bag, in ice water to quickly lower the temperature out of the Danger zone (4C-45C) and then store in the fridge till you need it.

You can store the chilled fillet in the fridge up to a week, and then to reheat put it in a pot of warm water (below the cooking temp or you might turn a perfect Medium-rare top Medium or well done). 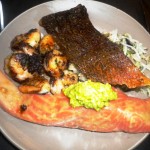