Right now Julie reckons we have over 45 meals worth of meat in the freezer, cooked and ready to heat and serve.  No we’re not becoming Doomsday preppers.  This is just a technique we’ve developed for making a meal in minutes – by preparing well in advance.

One of our mainstays has been slow cooking large fatty joints of meat on the weekend, then portioning it up into Meals to be frozen.  During the week we can take a bag of perfectly cooked and seasoned meat out of the freezer, thawing and heating it to serve in under 10 minutes.  We can use each meat in almost as many different ways as there are Cuisines – whether it be an Indian Massaman curry or a Tex-Mex Chilli, or a Greek Souvlaki.

This particular recipe we’ll take about 3 Kgs of Lamb Shoulder and your choice of aromatics (Spices and Herbs) and turn it into 15 freezer bags containing 200g of cooked shredded lamb. Below is the Meat Shelf in our Freezer – the Pulled Lamb is at the bottom left.  All this meat is cooked perfectly then frozen and every one can be turned into a freshly cooked meal in under 10 minutes. This bag of frozen pulled lamb can be simply reheated and added to a meal like this Lamb on a Cauliflower Risotto. … or cooked up with some curry paste (commercial stuff that is lo carb is fine) and half a cup of coconut milk to make a Easy Lo Carb Lamb Rogan Josh. … or as the meat basis for Tacos.  We use pretty much the same recipe for Pork Shoulder and Beef Shoulder to make pulled Pork and pulled Beef.

You can use any liquid, Water, Stock, some people even use Diet Dr Peppers (but seriously people that’s disgusting).  Here I have used chicken stock that I freeze in ice cube trays as well as Whey left over from making Cheese (also frozen in ice cube trays for long term storage). Next you’ll make a wet rub using a little Oil, Salt and your favourite Herbs and Spices pulverized up in a Mortar and Pestle or food processor.  Rosemary of course is traditional for Lamb, as is Garlic – I’m using Powder because I had temporarily run out of fresh garlic.  I also like using Allspice because it’s commonly used in Jamaican Jerk seasoning, but really you can use whatever aromatics you personally prefer.  I would recommend keeping the flavour restrained if you will reuse this meat as the base in different cuisines.  Lamb and Cinnamon works, strangely … but it’s not a great idea if you are planning to later use the lamb for Taco meat. Then you just give it a low slow heat for a long time until the meat is just falling off the bone.  My cooker runs at about 70C on it’s Auto setting, and it takes about 6 hours to render down that shoulder joint.  At the bottom of the cooker will be all the fat that has been rendered out of the meat, plus the stock, plus all the non fat juices that have escaped the meat.  At this stage I just shred the muscle meat up using a pair of forks – and then cook it for an additional hour in the juices. Finally we portion our meat into meals – which for us is 200g.  The easiest way I’ve found to do this is to put a soup mug on a kitchen scale and stuff a freezer bag into it – fill it to 200g (make sure to ladle in some of the Juices/Fat) and then push the meat to the bottom. Get as much air out before you seal it as you can to prevent Freezer burn. 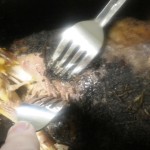