Our favourite cut of pork is the Pork Scotch Fillet (AKA Collar Butt or Boston Butt), it’s also rarely used because it isn’t the kind of cut you can’t just throw on a griddle and cook in 10 mins (unlike the Beef scotch Fillet) and for that reason it’s usually very cheap.  Prepared correctly, the Pork Scotchie is like a juicy medium rare steak made out of Bacon. The pork Scotch fillet is a heavily marbled cut of meat from the shoulder and it’s usually cooked slow as a roast because the fat keeps the meat very moist.  There is a secret trick to cook it like a steak, it requires several days worth of preparation and some equipment but the end result is totally worth it. So now you have perfectly cooked steaks in the freezer and there they will last for several months.  We have a dozen in our freezer right now. until you need them and then to prepare them for a meal you defrost them for about 30 mins and then sear both sides on a hot griddle just until the outside surfaces are caramelised (2-3 mins each side). I use a cast iron Bacon weight to ensure maximum Meat-Pan contact surface.

Deglaze the pan with the reserved bag liquid to make liquid bacon gravy. 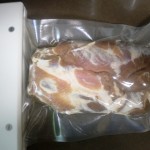 Pork Scotch Fillet sous vide
Pork Scotch Fillet (AKA Collar or Boston butt) prepared for use as a Steak. It requires several days worth of preparation but the end result is totally worth it. You end up with a meal that is the flavour of bacon in the texture and form of a juicy medium-rare fillet steak.
Ingredients
Brine Mix
Servings: Steaks
Instructions
Brining
Sous Vide
Sear and serve
Share this Recipe
Powered byWP Ultimate Recipe