This is another variation on the Easy Lo-Carb Ice Cream recipe using the classic Japanese flavour of Matcha which is the powdered green tea used in the traditional tea ceremony, and Black Sesame which is commonly found in cakes and desserts from India to Japan but especially China where black sesame soup is a classic dessert dish. I first met this combo at a Starbucks in China where they were making a Black Sesame and Green tea Frappuccino.  The two flavours go surprisingly well together. the slightly citrusy taste of the matcha is a subtle complement to the rich roundness of toasted sesame seeds.

Just to add confusion to chaos, I also have tried adding Pandan leaf extract to the Matcha ice cream and Squid ink to the Black Sesame swirl – both for their colour (vivid green and deepest black) and flavour.

The Pandan flavour is similar to Vanilla but it is a uniquely South East Asian flavour and it complimented the Matcha.  I’ll leave this as optional as it is not at all necessary but adds an interesting vanilla like warmth to the flavour profile.

The Squid Ink was a step too far and while the umami flavour it added wasn’t unpleasant, it kind of ruined the dish for everyone who knew there was squid ink in it.  So I suggest if you do add it to take your sesame from dark grey to an awesome deep black – don’t tell anyone. 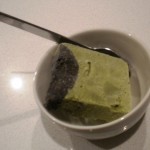