As you may remember I made myself a Coconut chocolate bar that was about 90 kCal to replace the Atkins bar.  The only problem is that Julie isn’t a big fan of coconut, so when I was having an Atkins coconut bar, she would have an Atkins peanut cluster bar – which is still high in sugar alcohols and preservatives and stabilizers.

So I developed the Maple Peanut Chocolate stick, using sugar free peanut butter (AKA Peanut paste) and essence of Maple. The Maple flavour I am using in this recipe comes from a concentrated maple essence product that only needs 1 ml to flavour the entire mix.  If you can’t find that you can substitute with sugar free Maple Syrup in exchange for both the maple flavour and the sweetener (otherwise it would be way too sweet).

The spices I am using are Quatre épices from Herbies – which are also known as the Speculas spices (a swiss spice cookie).  I think that traditional pumpkin spices would be just as nice.  If you have access to Australian bush tucker spices, roasted Wattleseed goes superbly with Maple and Peanut.

This recipe turned out to be much more caloric (and carby) than the coconut bar, so instead of splitting the recipe into 10 bars, I needed to make 16 smaller bars – so the coconut bar mould I use wasn’t going to be helpful. We had another breakthrough.  When we bought our freezer we got several ice cube trays and additional trays without any compartments that  you use to extract the ice cubes.  These trays are stackable and with a bit of cling film and a couple of 5 kg weights we were able to put one inside the other and mould a single block of the recipe. From there cutting into 16 pieces was trivial using a cleaver. 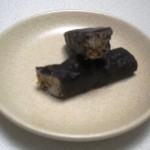