The Brown chicken stock recipe was originally Heston Blumenthal’s (How to cook like Heston) and I modified it to extract more minerals from the Chicken bones, and to have slightly fewer net carbs, without sacrificing any of the flavour.

These stock cubes will reappear in many of our recipes when we need to add liquid to a pan, or flavour to a sauce. One problem with skim milk is that it has 58g of sugars per 100g.  I have found that you can get an identical reaction from using instant full-cream milk powder which has 38g per 100g.  Also I found that we only needed just 5g of the powder to give a very light dusting which is about a quarter of the amount that Heston used – and we had almost the same effect.

The next change is that I reduced the Carrots and Onions – which have quite a lot of sugars, and added Bay Leaves, Thyme and Parsley which added flavour without contributing carbohydrates.

Finally I added a little vinegar not strictly for flavour, but to leach more of the minerals from the bones into the stock.  It will also help to break down the collagen in the chicken into gelatine.

The other trick that Heston used, was to cook his stock in a pressure cooker pot on the stove to try to keep as many of the volatile aromatic essences that give his stock it’s rich flavour in the stock rather than boiled off into the atmosphere of his kitchen.

I found one of the easiest ways to do this, was to use an Electric pressure cooker.  A manual pot you have to watch – an electric one you can set and just leave it to run it’s course. Mine cost under $50 from the local big box store.  It came with an utterly inscrutable manual that may have been understandable in the original chinese, but had since been translated into English word salad. It has many pre-programmed buttons that promise to make soup or congee – thanks to the hilariously useless manual I’ve never been able to use them.  I just use it’s manual feature to set the time that I want to cook for under full pressure and it manages everything else.

We’re going to a make this stock from the bones of a chicken carcass that we removed the meat from for another recipe, and to that we’ll add in a dozen chicken wings. Other than taste the other thing the wings add to this stock is the collagen which under heat and pressure and a little acidity breaks down nicely into gelatine and this give us a nice mouth feel as well as an excellent source of protein.

You’ll know you have a good stock  when you chill it in the fridge and the gelatine in it sets. NB: Normally I use MyFitnessPal to calculate the nutritional summary for recipes, which rounds down fractions.  I have hand calculated this recipe and to be precise there is actually 0.22g of Carbs, 0.52g of Fat, and 0.94g of Protein in each stock cube 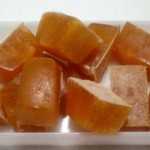